The dog was looking for food for her newborn puppies when she reportedly saved a 2-week-old baby girl from a forest in Kenya.

The dog found the baby in a forest south of the capital Nairobi. She then took the infant, wrapped in a dirty, black cloth, and carried it across a busy road and through a barbed-wire fence and placed it close to her own puppies.

A witness, Stephen Thoya says: "I heard the sound of a baby crying, (when) I looked closely, I saw a dog carrying a baby as it crossed the road."

The owner of the heroic dog, Mary Adhiambo says her dog lay next to the baby and cared for it until it was spotted by human rescuers. Ms Adhiambo washed the baby who's umbilical chord was covered with maggots. After cleaning the baby Mary Adhiambo rushed it to hospital. 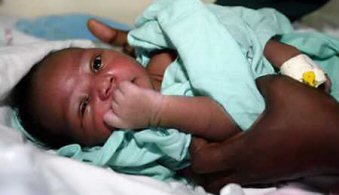 At the hospital, the 3.3 kilogram child was christened Angel. Doctors confirmed the newborn baby girl had been out in the open for at least two days after being abandoned.

Dr Jonathan Micheni said: "An infant of such a tender age, having spent two nights in the cold, is likely to develop respiratory infections and we have put her on a treatment to prevent any bacterial or fungal infections."

These kinds of incidents in which babies are abandoned are very common in East African countries like Kenya, where over 56% of the population lives on less than US $1 a day.

A hiker was attacked by a brown bear in a forest in Slovakia. His brave dog bit the bear in its butt and by doing so, saved his master. The 42-year-old was hiking east of... Read more

Baby smuggles cocaine in his diaper

During a routine check the police in Indiana found a bag with crack cocaine in a baby's diaper. The street value of the cocaine was about $140,000. Last summer trooper Douglas... Read more

A drunk Thai man was bitten several times when he tried to rape an unwilling dog. Police said the 33-year-old man had been drinking heavily with friends before he tried to rape... Read more

A pregnant Mexican woman performed a caesarean section on herself using a kitchen knife. The do-it-yourself c-section was successful and the woman gave birth to a healthy baby boy.... Read more

A German Nazi who taught his dog the famous, but much hated, Nazi salute was arrested for shouting "Sieg Heil" in public and wearing a T-shirt with Adolf Hitler's picture on it.... Read more