Russia is offering a honeymoon out of this world

The Americans put the first man on the moon and the first tourist in space. Now the Russians could make one wealthy couple the first members of the 240-mile-high club.

In its latest attempt to develop space tourism, Russia is offering a pair of newlyweds the chance to swap Venice or Paris for a cosmic honeymoon on board the international space station.

For $65 million - the cost of a pair of space return tickets - the couple could become the first to experience the uncharted joys of sex in zero gravity.

"It would bring the mile-high club to new heights," said Rob Volmer of Space Adventures, the company that has teamed up with the Russian Aviation and Space Agency to offer the trip. 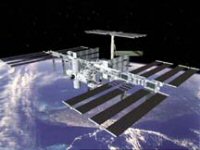 "The international space station is as large as a football field. There are plenty of nooks and crannies where a couple could hide. If Jennifer Lopez and Ben Affleck want to get away from it all on their honeymoon, we have the perfect solution."

Sergei Gorbunov, of the Russian Aviation and Space Agency, said the chosen couple would have to be in good physical condition and prepared to undergo a rigorous 10-month course to train for space travel.

The pair could be blasted aloft aboard the Soyuz spacecraft that was used by Denis Tito and Mark Shuttleworth, the wealthy businessmen who paid $25 million each to become the first tourists in space.

Space Adventures and the Russian agency have signed an agreement for up to four more space tourists to go into orbit. Officials said the first newlyweds could be in space by 2006.

Sex has long been a space taboo. A US married couple spent eight days as cosmonauts on Russia's Salyut space station in 1992, but one always slept while the other worked.

But as regular stints on the international space station can last up to six months, the chances of cosmonauts becoming sexually involved have increased.

In his book Living in Space, G. Harry Stine, a NASA technician who died in 1997, wrote that agency staff at the Marshall Space Flight Centre in Huntsville, Alabama, had used a buoyancy tank that simulated low-gravity conditions to test the possibilities of weightless sex.

"It was possible but difficult," he wrote, "and was made easier when a third person assisted by holding one of the others in place."

Pierre Kohler, a French scientific writer, claimed in another book that NASA had tested 20 positions by computer simulation and then arranged for two people to try the best 10 in zero gravity.

Only four were possible to reach without "mechanical assistance", according to Kohler. An elastic belt and an inflatable tunnel, like an open-ended sleeping bag, were needed for the other six.

"One of the principal findings was that the classic so-called missionary position, which is so easy on earth when gravity pushes one downwards, is simply not possible," he wrote.

It is unclear whether the Russians have carried out research on sex in space. Valery Polyakov, who holds the space endurance record for a 14-month stint on the Mir station that ended in 1995, denied he had had space sex with his wife and fellow cosmonaut Yelena Kondakova.Posted in Tech & Science Business & Politics by Paul van der Maas
| Comments

Man offers drugs in return for his stolen car

An Argentinean man was arrested after offering drugs in return for his car. He hoped the car thiefs would bring his car back to get the drugs. Juan Carlos Centurion, whos car was... Read more

A 17-year-old boy was arrested while trying to hire an undercover police officer to kill his mother. He instructed the "hitman" not to damage the television during the attack.... Read more

18-year-old auctions her virginity on the internet

Rosie Reid sold her virginity in an auction on the internet to avoid graduating from university with debts of $36,700. The 'lucky winner' was a BT engineer, she claims. Rosie... Read more