Rhino gets it on with a Renault

A rampant rhinoceros gave a group of visitors a glimpse of nature in the raw at a British safari park when he tried to have sex with their car.

Sharka, a two-ton white rhino, got amorous with Dave Alsop's car when he stopped with three friends to take pictures of the animal mating with his partner Trixie at the West Midland Safari Park. 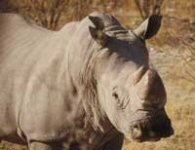 The 12-year-old rhino tried to mount the Renault Laguna from the side, denting the doors and ripping off the wing mirrors before Dave drove away with a puffing Sharka in pursuit.

"He was a big boy and obviously aroused," Mr Alsop said on Thursday. "He sidled up against us. The next thing I know he's banging away at the car and it's rocking like hell."

A spokeswoman for the park, which says "rhinos are not particularly intelligent animals" on its web site, said Sharka was a hit with the female rhinos and had fathered two calves in the last five years.

"He's got a bit of a reputation this lad and he was obviously at it again," she added.

To get an idea of what it must have looked like, take a look at this commercial from Renault, hosted by Cassyput.Posted in Sex Life Animals by Paul van der Maas
4.0/5.0
| Comments