Madison, Wisconsin - A great horned owl found starving in the wild because it had gone blind could be released this spring after having new eye lenses implanted. 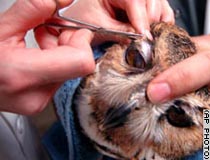 The owl, named Minerva by medical personnel, underwent two hours of eye surgery, and Dr. Chris Murphy said she was in good condition during a follow-up exam.

"Perfect," said Murphy, a board-certified veterinary ophthalmologist. "Ounce for ounce, this is considered one of the toughest birds on the face of the earth."

Minerva was found in a pretty bad condition in early December, after someone told wildlife rehabilitators Sue and Jerry Theys an owl had been sitting on a fence for three days.

Sue Theys, who netted the owl, said she suspected the owl had cataracts. After a local veterinarian confirmed the diagnosis, the Theys brought the owl to Murphy at the University of Wisconsin-Madison School of Veterinary Medicine.

Murphy had a pair of lenses on hand that had been custom-made six years ago for another great horned owl that proved to be an unfit candidate for the surgery. The lenses were designed by Murphy and Dr. Chuck Stuhr.

"To the best of my knowledge, this has not been done anywhere," Murphy said.

The Theys, who operate Wildlife of Wisconsin wildlife rehabilitation, paid for $300 of the $1800 procedure, with the veterinary school donating the rest.

During her recovery, the Theys have been giving Minerva antibiotic eye drops three times daily and feeding her rats and an occasional rabbit. 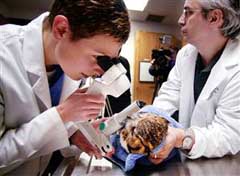 In April, they will move the owl to a much larger flight cage and release live rats into the straw-filled enclosure to see if she can successfully hunt. If so, she'll be released back into the wild.
Great horned owls are the largest owls in North America, with females obtaining a wingspan of 1.5 meters and weighing up to 2.5 kilograms. They use night vision and an acute sense of hearing to find prey in the dark.

"She's extremely feisty," Sue Theys said. "She can't understand why we're messing with her. She can see and she wants to take off and fly." Posted in Animals Tech & Science by Guus Cartigny
| Comments

A 24-year-old from romania crashed into a tree in a car he stole earlier. The Romanian man decided to steal a car after he had a row with friends about his inablility to do... Read more

Executioner shot by his animal victim

A dog is a man's best friend as the saying goes. Troughout the years dogs have saved mans life as well as helped track killers on the loose. We have taught them tricks as well as... Read more