A man was attacked by a small shark and had to swim 300 metres, walk to his car and drive to a local surf club, with the shark still dangling on his leg, to get it off.

22-year-old Luke Tresoglavic was attacked by the shark as he was snorkelling on a reef off Caves Beach, south of Newcastle.

Mr Tresoglavic said today that when the 60 centimetre wobbegong,

or so-called carpet shark attacked him, he instantly grabbed hold of it with both hands to stop it from shaking.

"I just realised I had to swim in like that, hanging on to it," he told ABC radio.

"Once I got on to shore, a couple of people tried to help me but I could not remove it, it was stuck there."

"So I got up into my car and then drove to the clubhouse and luckily the guys down there had a clue about what to do."

Michael Jones, a senior lifeguard, could hardly believe his eyes when Luke walked into the clubhouse.

"He basically asked the question, 'Can you help me get it off?' â€“ there's nothing in our procedure manual for that type of thing."

"It latched on and wouldn't let go, it was thrashing around and he's lucky he didn't get into difficulties in the water trying to swim with that thing thrashing around."

Micheal, Luke and another lifeguard tried to get the shark to loosen it's grip by flushing its gills with fresh water. "I grabbed the tail and one jaw, Luke grabbed the other jaw and my partner, the other beach inspector, flushed it with water and we were able to get it off without creating too much more tissue damage," Mr Jones said.

After successfully removing the shark and with blood oozing from 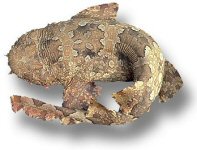 his leg, Luke drove to the nearest hospital, taking the dead shark with him.

The last time a shark was spotted at this particular beach was seven years ago, although it's common for them to hang around the reef, because it's filled with fish.

The type of shark Luke Tresoglavic was bitten by, the wobbegong, can grow up to three metres in length. They have extremely sharp teeth and are known to be moody and short-tempered.

Globally, about 24 people get bitten each year. About three of these attacks are fatal. This is a very small number compared to the number of people that swim in the oceans every year.Posted in Animals Health & Food by Paul van der Maas
| Comments

A Chilean presenter was shot in his leg on TV when a guest on his show accidentally used a real gun instead of a fake gun. It was supposed to be a fake duel. A guest on the TV... Read more

A drunk Thai man was bitten several times when he tried to rape an unwilling dog. Police said the 33-year-old man had been drinking heavily with friends before he tried to rape... Read more

A Romanian man says he was trying to commit suicide by swallowing five teaspoons. The man had intended swallowing some bottle caps and another two teaspoons. However he stopped... Read more

A pod of dolphins circled protectively round a group of New Zealand swimmers to fend off an attack by a great white shark. Rob Howes and three other lifeguards were on a training... Read more